School’s Out! These Former Washington Classrooms Are Now an A+ Abode for $699K 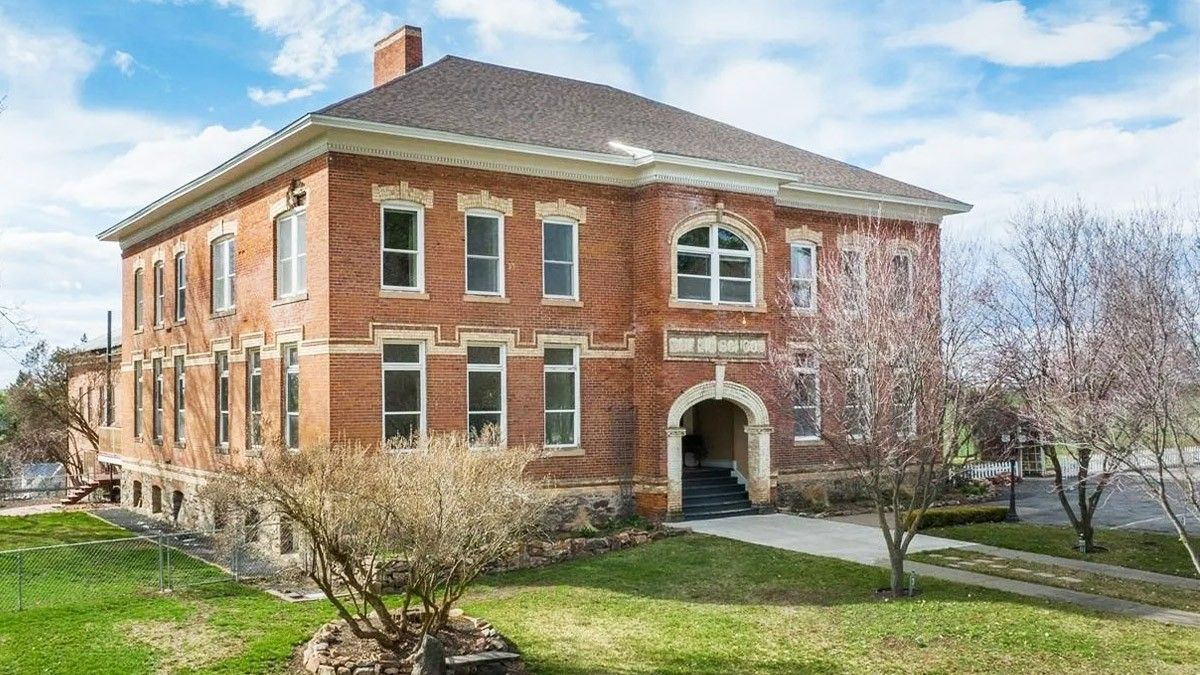 What was once the most modern school in Latah, WA, has found new life as a home at the top of its class.

The Latah School (aka Union High School) and its attached gymnasium are available for $699,000.

The building dates to 1908, and it served students for 50 years. The rural schoolhouse has been on the National Register of Historic Places since 2002.

“It sat vacant for about 60 years before it went through its conversion,” says listing agent Connie Newman, of Professional Realty Services. 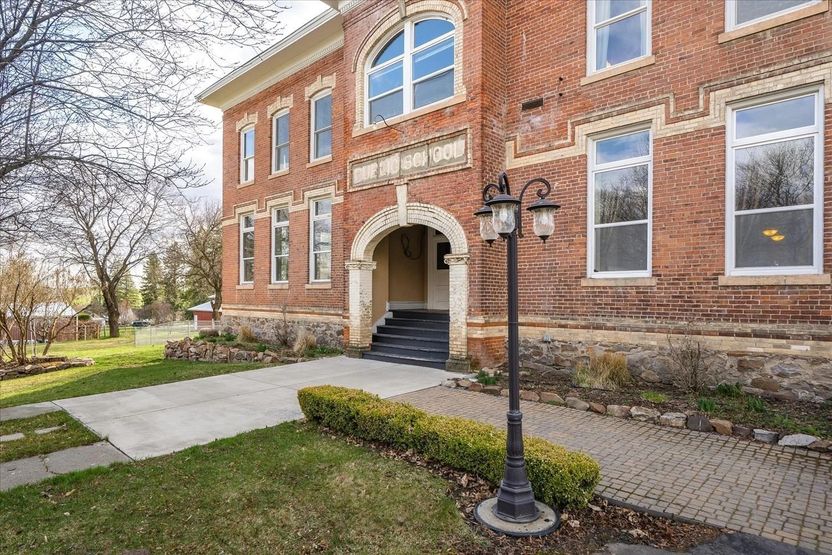 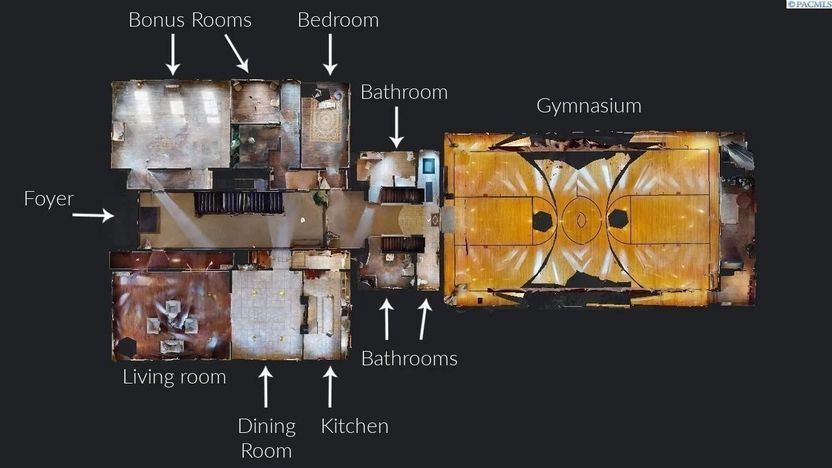 The sellers purchased the school building a few years ago from the family who renovated and transformed it into a home.

“When you first walk into the property, you go through an exterior corbeled arch and a staircase that takes you up to the main level,” Newman explains. “The original brick labeling that says ‘Public School’ is right above that arch; so you feel like you’re walking into a school building, which is very cool.” 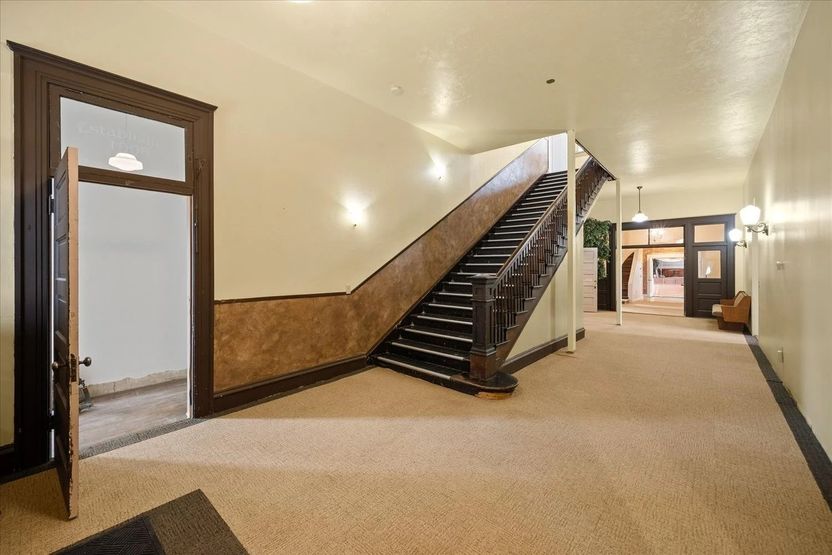 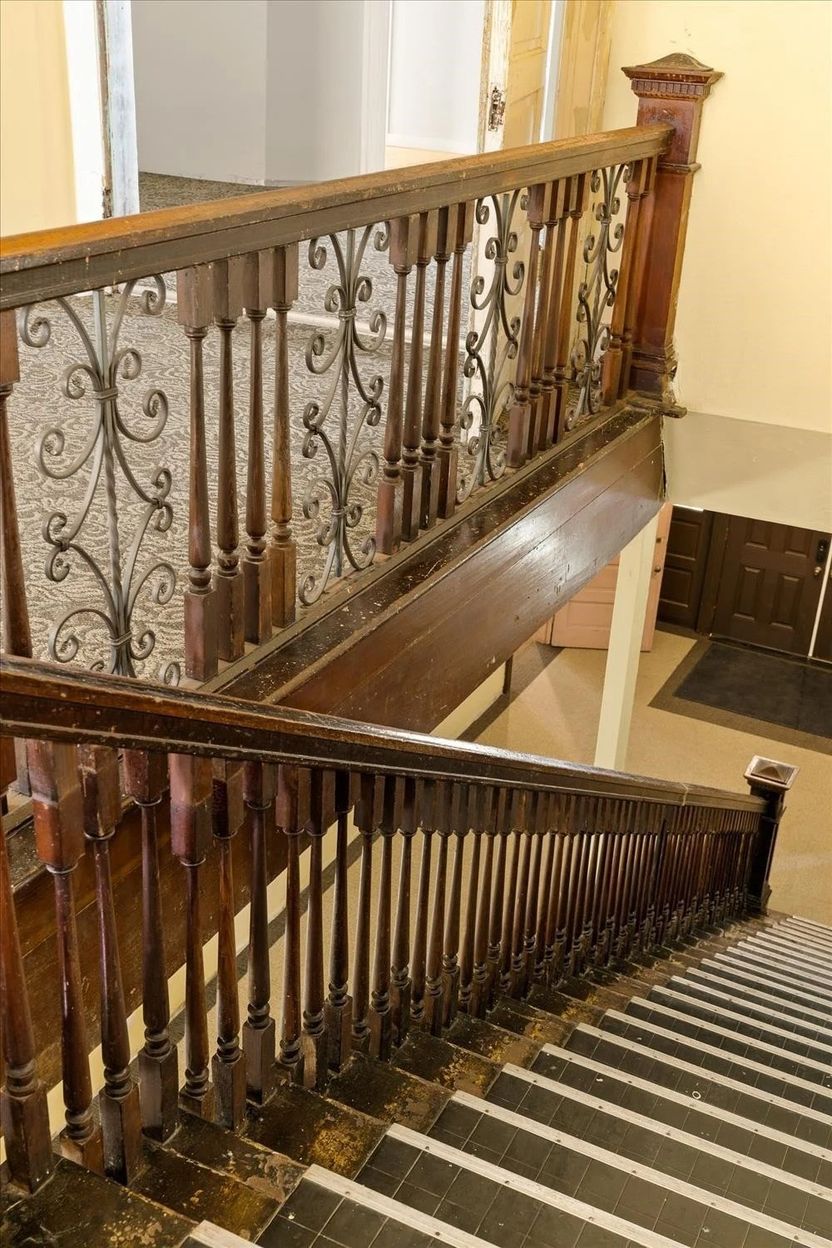 But inside, it’s clear that the students have long gone.

“You enter a grand lobby, which is one of my favorite parts of the building,” Newman says. “Along the railing, you can see the footprints from the younger students who were holding the railing—going up and down those stairs.” 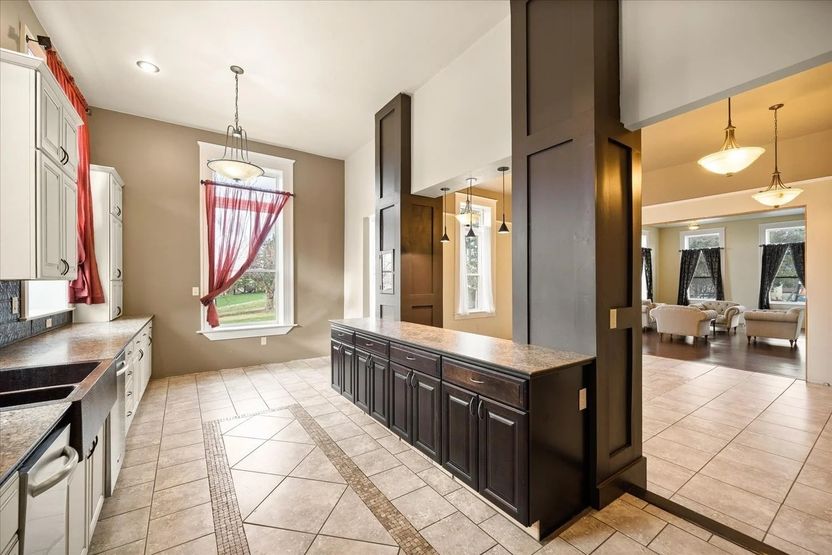 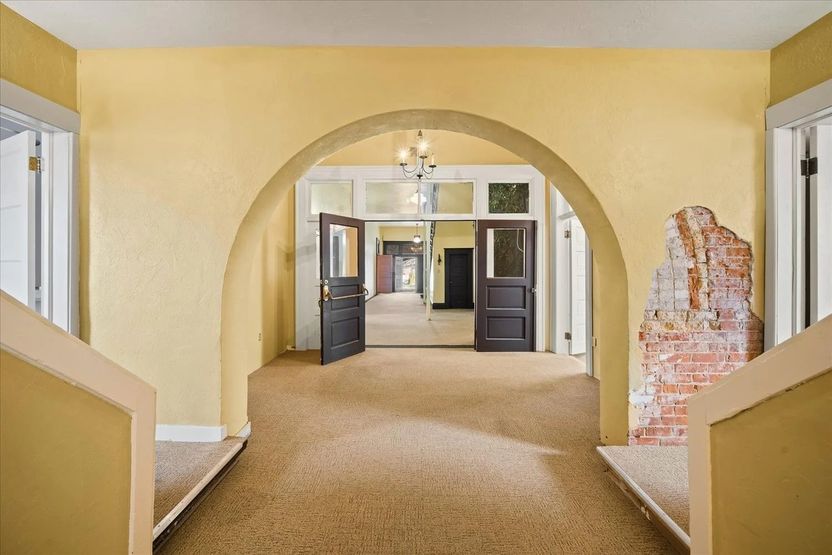 “My favorite thing about the house is that, as grand and large as it is, it’s cozy,” Newman says. “You don’t feel, when you’re there, that you’re in a massive structure. It really feels like home.”

The main schoolhouse has three levels: a basement; a living level with the kitchen; and an upstairs space with bedrooms, a library, and some unfinished former classrooms—one of which still sports its original wood floors and a 1908 (!) chalkboard. 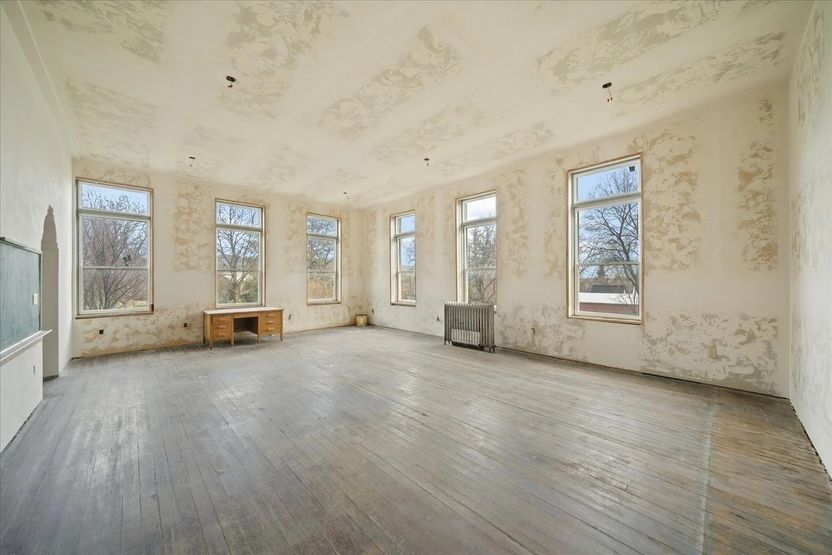 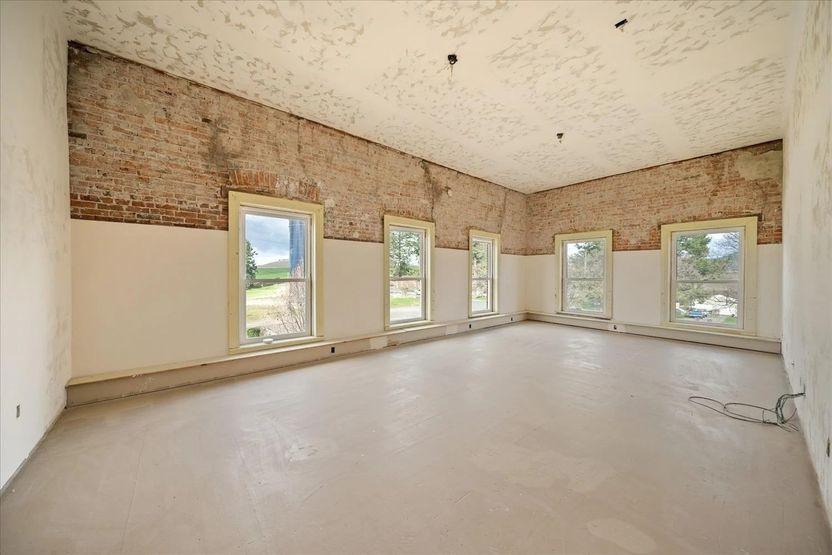 A breezeway connects the main house to the gymnasium, which was added in 1920. And perched above the gym’s original maple floor is a mezzanine, where spectators once watched basketball games.

“As you tour the basement, you actually come across the original chalkboard that was down there that they would have used in the locker room to do the basketball plays,” Newman says. “The original lockers are also there.” 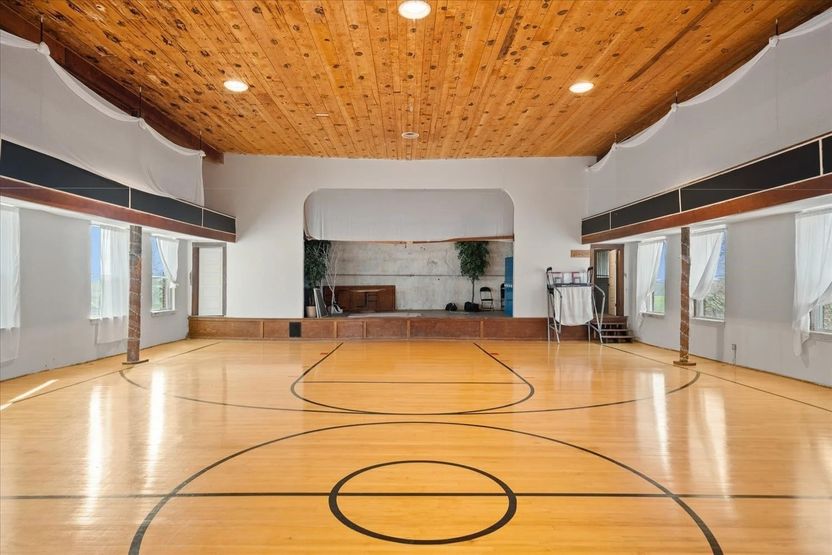 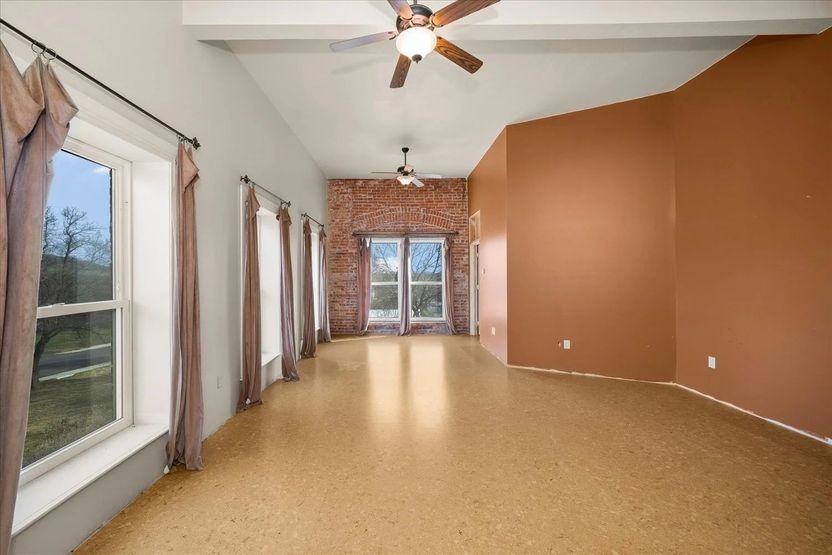 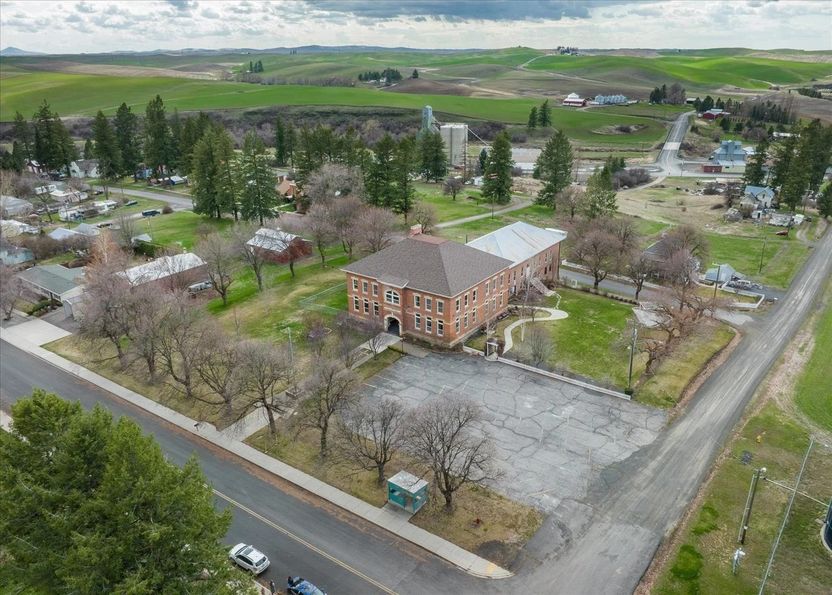 The basement in the main house has a large workspace, where the school’s shop and woodworking rooms were set up.

The home’s previous owners used it as a wedding venue.

And its current owners have made the space a haven for victims of sex trafficking. They’re selling it to move their operations closer to Spokane, WA, which is less than an hour away.

And for the next chapter of this school’s story? Newman envisions diverse possibilities for the 1.4-acre property.

“It’s going to be mixed-use and potentially even multigenerational family living,” she says. “It’s an incredibly peaceful setting.”

The post School’s Out! These Former Washington Classrooms Are Now an A+ Abode for $699K appeared first on Real Estate News & Insights | realtor.com®.